It’s really interesting just how much changed during the Obama era, from health insurance to “acceptable” corruption like Biden, to campus policies.


One such policy concerned encouragement of colleges to admit students strictly based on “Diversity” concerns, so that more “minorities” would be admitted even if, purely based on academics, other students were more deserving. I put “minority” in quotes because Asians never benefit from this, despite being as much, or more, of a minority in many schools.


Like so many Obama policies, Trump seems determined to reverse it:

The article I’ve linked to above has a helpful chart showing academic readiness for Michigan in various subjects, broken down by what we refer to as “race”: 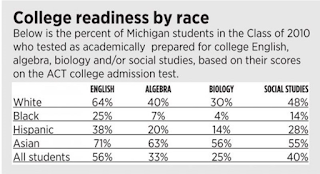 --Like I said, Asians really get the short end of the stick by not getting “minority” status.


According to the report, the Trump administration argues that the 2011 and 2016 Obama guidelines—which give universities the right to select black and Hispanic applicants with lower scores before whites with similar or higher scores—serve to “mislead schools to believe that legal forms of affirmative action are simpler to achieve than the law allows.”


I must also point out that these racist policies are not really helping the supposedly disadvantaged among us. Around 50,000,000 have student loans now, loans which cannot be paid off by students who went to college despite having little academic ability at best. The phrase “Democratic Plantation” exists for a reason, as this policy (among many others) really seems to exist to trap kids into a form of slavery, in this case debt slavery.


Of course, the lower scores are merely a reflection of racial differences in IQ and ability, and have nothing to do with “white racism,” as the fact that many Asians in America score as high, if not higher, than whites, and they are also excluded from the “affirmative action” program even though they are not white.


Not many sites dare to say things like the above, as it contradicts the narrative that anything besides racism could possibly be responsible. Asians spend far more time studying, after all, so there is an explanation here beyond the ever-so-contentious “intelligence.”


Asians, incidentally, have been fighting the racist admissions policies, especially at top tier schools. It’s something of a tough lawsuit, but a plausible one since Obama’s policies contradict established law:

In fact, the Justice Department  has recently been investigating a complaint by more than 60 “Asian-American” organizations that say Harvard University’s policies are discriminatory because they limit the acceptance of Asian students on precisely this basis.


The Justice Department joined Students for Fair Admissions, the group behind the case, which has urged the disclosure of “powerful” evidence showing that Cambridge, Massachusetts-based Harvard is violating Title VI of the landmark 1964 Civil Rights Act. Title VI prohibits discrimination on the basis of race, color, and national origin in programs and activities receiving federal financial assistance.

I wish them luck in their case, but it’s a distraction. The question for me isn’t Obama’s policy per se, but why didn’t our schools respond with outrage at being encouraged to violate the Civil Rights Act? The primary answer as I see it is the “leaders” of our system saw this as an opportunity to grow, grow, grow, the schools some more—at the expense of saddling certain minorities with crushing debt.


The Supreme Court most recently addressed affirmative action admissions policies in a 2016 case, voting 4 to 3 to uphold what it called a “race-conscious” program at the University of Texas at Austin—but which was in fact just another anti-white program.


That’s a narrow, narrow, victory for racism…I can see why a certain party is very concerned at the change in make-up of our Supreme Court.


Another odd trend in higher education (and daresay the media) is the pro-Islam movement. Trump seems to be working to end that as well:

Now, I’ve nothing against Islam any more than I have what’s being defined as “minorities,” but it’s clear something fishy is going on here:

According to the Department of Education, the program offers very few, “if any,” programs focused on the historic discrimination against religious minorities in the Middle East, and lacks balance, focusing on the “positive aspects of Islam” while having an “absolute absence” of a similar focus on the positive aspects of Christianity and Judaism.

Much as I noted courses on Marxism focus on the utopian promises while “de-emphasizing” (an understatement) any discussion of what invariably happens under Marxist regimes, it seems a similar modus operandi is in effect here. Of course, I again wonder how such one-sided discussion became part of an education (as opposed to indoctrination).


That said, I’m not real wild about government offering direction on how things should be taught. The protest against government interference here, which I would normally support, tells me that Trump’s administration has the right of it, as much as I hate making such an admission:


Henry Reichman, the chairman of a committee on academic freedom for the American Association of University Professors, reacted to the Education Department’s letter by referring to it as, ironically, “political correctness” enacted by the “right-wing.”


“Is the government now going to judge funding programs based on the opinions of instructors or the approach of each course?” asked Reichman. “The odor of right wing political correctness that comes through this definitely could have a chilling effect.”

Oh, stop being coy here, just call him a NAZI and be done with it. There’s an informal rule that all internet arguments eventually devolve into one side calling the other a nazi. An important corollary to that rule is that whosoever cries NAZI first automatically loses the argument.


I trust that soon the rule, and the key corollary, will soon be extended to the cry of “right wing” as well. It can’t happen soon enough for me.


The key issue here is taxpayer dollars are being blown on “education” into a system which taxpayers themselves don’t want. If Trump can indeed shut this down, this gives hope that perhaps, someday, student loan money won’t continue to flow to schools far more interested in indoctrination than education. This, too, can’t happen soon enough for me.