“Enstupidation,” the act of making someone stupid, is an actual word. I remember, years ago, explaining to a group of Leftists how the process works. I got nowhere, of course—they couldn’t stop laughing at the word “enstupidation,” to learn anything. It’s sad that so many of our youth are so damaged they’d rather hoot and throw poo than learn.


There have been many claims that we’ve been “dumbed down,” i.e., enstupidated, but I’m in the mood to talk about how we can tell that this activity isn’t simply the rant of an online conspiracy theorist…something has gone wrong here. Allow me to show it unarguably.


When I was a kid, I loved board games. Computers, much less “computer games” hardly existed, and the early computer games were rudimentary, with line graphics and LEDs at best…I’m pretty sure I could sit down and code some of the ones I played as a kid, in a single afternoon.


One game I played often was Code Name: Sector. A quick pic of the game: 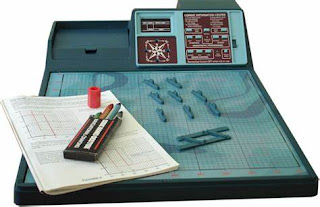 --a laminate board, crayons, blinking lights, and some plastic bits. The slot at the left? That’s where you put the bits.


The whole “computer” is about the size of a pocket calculator, but with a smaller display. The basic purpose of the computer is it kept track of a submarine’s hidden position (the plastic subs in the game are “trophies” which you don’t really use or need for the game…but look cool!). As the player, you controlled imaginary destroyers, whose location you plotted on the grid, with the crayons (you could have up to 4 destroyers at once, hence 4 different colored crayons). As you moved the destroyer, you’d get rough information on the sub’s location; if you got close enough, you could drop a depth charge and, hopefully, sink the sub, ending the game. It’s basically a solitaire game, but you could play with “up to 4” players if you really wanted to, all competing to sink the sub first.


Certainly a fun game for its time, and quite cutting edge for 1977 when it came out. A key part of the game is plotting your ship’s location, inputting your speed and direction, and having the computer “calculate” your new location after a move. Then you’d plot the new location, and connect the two plots.


So, what’s the recommended age for this game where the player would have to be able to graph a line? Ages 12 and up. I want to hammer this point home:


In 1977, it was understood that a 12-year-old was quite capable of learning how to graph a line, simply by reading the game rules. Corporate America seldom over-estimates consumer intelligence, so they figured any 12-year-old could do it, and probably younger children as well. Twelve years of age is “definitely old enough to understand how to play,” and I point out again this is basically a solitaire game.


Flash forward a generation, to 2019 (although what I say next has applied for at least a decade)…now how old do you need to be to understand how to graph a line? Well, let’s look at college, and find out. Here’s an excerpt from a typical college algebra course:


Recognize the equations and sketch the graphs of the following: Lines,…


I assure the gentle reader, every college algebra course covers lines, I’m not cherry-picking here. But the point is, it’s understood that a college freshman, definitely a high school graduate and probably 18 years old (or older), will not only not know how to graph a line, but will need instruction by a professional with an advanced degree before he could possibly figure it out.


I’ve taught college algebra many times, and I assure the gentle reader that I rarely managed to get much past 50% of the class to understand the concept of how to graph a line, at least when I was at open admissions schools. I would spend about a week on the concept, incidentally…and nobody spends a week learning how to play a board game.


We’ve been enstupidated, clearly. But perhaps I’m using too obscure a game to make this point.


A game everyone knows about is Monopoly, which has a fascinating history. Most people find the game incredibly complicated, particularly two calculations: the penalty for un-mortgaging a property, and the cost of income tax (the latter dreaded both for the penalty, and for the “work” of calculating it!).


“Income tax” in Monopoly is either 10% of all you have, or $200. Most folks just pay the $200, because they can’t figure out how much to pay in the former option. There’s a page explaining how to do it, and there are even special Monopoly calculators just for folks who need additional help.


But...the hardest calculation in Monopoly involves calculating 10% of a number. Now, Monopoly was patented in 1904 (although versions existed in the 19th century)…well before the age of calculators.


It’s for ages 8 and up—they clearly haven’t updated their age scale to account for the enstupidation of our citizens, or just assumed even little kids can use cell phones for the Monopoly calculation app.


What has happened to us as a people, that a century ago it was understood that even a child could, say, calculate 10% of $200 without much effort, but now adults use hundreds of dollars of electronics to do such a thing because they just don’t know how?


There was a time when a child could graph a line or calculate 10% of a number, as these games show. But now we cannot expect such of our kids. There’s one obvious explanation: