Game of Thrones and College Football

It’s obligatory to put “spoiler alert” in front of discussion of Game of Thrones; I’m going to be discussing one episode in detail, “Battle of the Bastards,” so if you haven’t seen up to that part, fair warning to stop reading now. 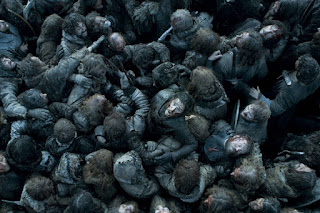 --it's a great shot, but this was a throwaway, a desperate attempt by the producers to do something with what little they had. Read on to find out why...

It’s no secret that once Game of Thrones the HBO series went past the books it’s based on, the quality dropped, sometimes precipitously. Instead of fairly deep political machinations and a somewhat realistic action/consequence narrative in a pseudo-medieval world with a touch of magic, the series turned into standard Hollywood fare. The fantasy aspects of the show were light: before about the 5th year of the show, the most powerful magical effects most of the world had seen were dunking a sword in oil and lighting it, and the bones of long dead dragons. Past that, all things magical were considered “north of The Wall” stories nobody in the world really believed.

But, even as the sexposition trying to explain the complicated backstories finally died down (at least one actress renegotiated her contract for fewer nude scenes), the more recent years began to disappoint, and it’s clear now the “epic battle” at the end is going to be yet another “Kill the Alien Queen” trope little different than the last few dozen similar stories out of Hollywood.

My own personal peeve is how crude the military tactics are in the show. Every battle is determined by a “surprise attack,” because at no point in the multi-thousand year history of this fantasy world has there been a general with enough insight to understand how scouts work.

A classic example of how ridiculous the world is (or has changed since Hollywood writers took over from the novels) is this one harbor town built at the base of a cliff, next to an ocean.  It leads to a great scene where an attacking army of monsters literally jumps off the cliff to attack the city. It’s a cool visual but…why isn’t there a watchpost at the top of the cliff? Being next to an ocean like that, you could probably see for miles, and Earth’s ancient world certainly knew the usefulness of lighthouses and the like. The town is walled, but there are no sentries, so the inhabitants literally have to peek through cracks in the walls to see if an enemy is approaching.

Seriously, this is not clever writing, even if it’s cool to watch.

One of the big combat scenes was “Battle of the Bastards.” A quick summary:

1) Like most battles in the show, it’s shameful, with the commander literally running out into the open between the two armies, all alone. It makes for a nice visual of the lone idiot standing in front of a full on cavalry charge, although in the real world, an army could rout at the sight of their commander acting like such an idiot. For some reason, the Evil cavalry flat out disappear after the charge and aren’t seen again.

2     2) The battle goes badly for the heroes, with a lame scene where the Evil commander orders his archers to fire into the general melee—probably killing his own men, since he’s winning and outnumbers the Good guys, of course. Because the writers have no respect at all for the viewers, they make a point of showing the Good captain not doing the same (this is Hollywood’s best understanding of morality: the good guys don’t kill their own troops). Again, I’ve seen this countless times in other equally poorly written shows.

3) Despite the Evil commander’s idiocy with the archers, he somehow manages to expertly train his infantry in ancient Greek phalanx-style tactics, and thanks to a strange 20’ pile of bodies that appears on the field, he envelopes the Good forces, slaughtering many of them (note: these very specialized tactics are never used before or since on the show or in the books).

4) The battlefield turns to a field of mud, but a surprise charge by a huge force of Good cavalry (in mud!) turns the tide, and saves the Good guys. The Evil cavalry and archers probably could have helped, but they went home…or something.

5) The Evil commander retreats to his well-defended castle. The Good commander’s forces smash down the castle gate in a surprise attack-- while the inhabitants of the castle knew an enemy army was in the area, they didn’t even know they were being attacked until there was pounding at the main gates! There’s probably not a castle on Earth where you can march an army up to the front gate unseen…

There are other issues of stupidity in the battle, but the above are the highlights of just how weird and incomprehensible the scene was.

Despite the serious issues with the battle, I don’t criticize the actors or producers here. This is just extraordinarily bad writing, even if the rest of the film crew is good at what they do.

It turns out, there were long, arduous discussions between the writers and the producers, the people actually creating the show. They were given less than two weeks by the writers to shoot a scene that the professionals (i.e., non-writers) said would take more like six weeks to film. Making things even worse, there were three days of solid rain, turning the field into a pool of mud. It was impossible to film any battle scenes after that, so all the great mud scenes were throwaway shots, where they simply try to make lemonade from the all the rainwater (and doing a fine job of it).

There was supposed to be a different ending to the Battle of the Bastards, but they had to show crud instead because what the writers wanted just wasn’t possible.

The big main issue was the scene had 70 live horses, and simply training those horses is too time-consuming for what the writers wanted. The writers based their scene from an awesome Japanese film, Ran. It’s a great movie, but its wonderful cavalry battle scenes have real horses being killed and maimed…it’s inevitable when you have a bunch of horses and men with pointy things running full speed, even on a fake battlefield.

We won’t stand for killing horses onscreen today, and there are very strong rules for how you can use horses in shows; a movie like Ran simply cannot be filmed now with real horses because our culture no longer allows for animals suffering for our amusement.

But that’s what the writers wanted, they wouldn’t let reality interfere with their vision, and so we get a hot mess here. Along with the other hot messes in the episodes, it really takes the shine off a series that, thankfully, will end in one more season, hopefully before embarrassing itself beyond any chance of forgiveness.

Anyway, I’m ok with the battle scene not being as glorious as it could have been, for the sake of safety issues for the horses.

So what does this have to do with college football?

One example (amongst legion) is the exploitation of the football players. They’re paid nothing. They risk life and limb on the battlefield (if you will), and we tolerate it, because, hey, only a few get seriously hurt, and a few move on to the NFL and make huge bucks. Yes, most just waste their time, but that’s little different than the time horses waste when they’re on movie sets instead of frolicking in some pasture.

But now we know: it’s more than just a few players getting hurt:

In Dr. McKee’s sample, the incidence of CTE for players who stopped at college was 91% (48 out of 53). Fifty-six percent of those displayed severe pathology. The more football one plays, the more damage is sustained, but ending short of the pros doesn’t seem to give players a pass from the risks of the disease.[1]

The gentle reader needs to consider: this study provides real evidence that 90% or more of college players suffer severe brain damage from their play. Now, sure, it’s just one study, so it might not be accurate. Maybe only 80% of college players suffer permanent brain damage for our amusement. Maybe it’s 70%...but the point is many of these kids pay dearly for that time on the field, suffering lifelong injuries for a game.

Wait a second here. We won’t even tolerate a single horse suffering for our on screen amusement. Not even one suffering horse of a hundred onscreen is tolerable.

This study shows 90 kids out of a 100 will be debilitated by college football. Why do we put up with it? We shouldn’t even let children play this game, as the evidence is very strong that quite a bit more than one in a hundred is going to suffer severe injury.

We don’t tolerate our horses being abused, maimed, or killed for something so trite as pure amusement. Why should we tolerate it in our college students? We can no longer argue that college kids being abused, maimed, or killed on the football field is such a rare event that it’s only wussies who worry about it. We know that most of those kids will suffer with lifelong injuries.

Maybe the widespread knowledge of just how devastating this game is will finally end college football. I grant none of the other chamber-of-horrors-type revelations have put a dent in college football but…

I sure hope that someday we’ll treat our college students as well as we treat horses. It’s not that high a standard, honest.