An Obvious Question About Vaccination

I thought I’d said all I was going to say about vaccination, but a question keeps nagging me.

Q: Which lumberjack will have heavier muscles, the guy who cuts down trees with a chain saw, or the guy who uses an axe?

Let’s try a harder one:

Again, the answer is obvious: the worker who rides the bike, who actually uses his cardiovascular system, will have a better system.

It’s very straightforward stuff: the parts of your body that you use develop and become stronger, the things you don’t use wither away and become weaker. Yes, there’s an absolute limit, and there’s totally such a thing as overdoing it, but study after study has shown that even a little bit of exercise is a good idea.

Does any other part of the human body work that way?

Sure. A common side effect of testosterone replacement therapy is testicle shrinkage…the testicles aren’t being used as much because of the therapy, so the body doesn’t develop them. It’s pretty reasonable to guess that, as far as the human body is concerned, “use it or lose it” is pretty good description of how it works.

Now, doctors and medical researchers aren’t stupid, not by a long shot. They see these obvious things, and realize that other ailments might be prevented, or at least helped, by simply working the body appropriately. Thus, they have no trouble conjecturing that brain exercises might help patients with Alzheimer’s, and there are a legion of physical therapy exercises designed to strengthen weakened parts of the body.

Now back to vaccines. We’re told that literally dozens of vaccines are now necessary to maintain health…even as a great many other diseases seem to be on the rise.

But consider the following: 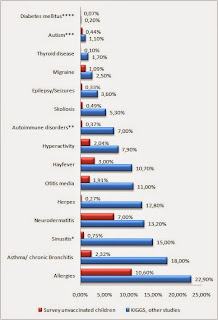 Yes, I know, it’s an internet survey, and no sane person takes anything on the internet at purely face value. People online claim that vaccines are responsible for all sorts of diseases, and, of course, the mainstream research consistently says that’s rubbish.

Still, looking at that chart, a natural question should be, “Could it be that vaccinations weaken the immune system, in much the same way that driving a car weakens the cardiovascular system, using power tools weaken the muscular system, and testosterone replacement weakens the primary testosterone creation system?” There might be benefits to non-vaccination here that have been overlooked. I totally grant that some diseases are so dangerous that the benefits of vaccination outweigh any theoretical benefits of non-vaccination.

Other diseases are so minor, however, that the benefits of vaccination in these cases are likewise minimal, minimal enough that considering the benefits of non-vaccination should be on the table. The recent hoopla over measles outbreaks, for example, was pretty ridiculous considering that, for a very long time, measles was considered fairly trivial for most people (yes, I know there is a small risk of death, in much the same way you risk death getting your ears pierced). Toss in the very real possibility that measles (and thus, exposure to measles) may well grant some resistance to cancer, and the terror over some kids catching measles, a disease that, in my parent’s generation, was as ubiquitous (and dangerous) as acne, is highly puzzling.

My question is simply: how is it that mainstream medical researchers have long understood the obvious “parts of the body that are used get developed, those that aren’t used don’t get developed” concept, but have never seriously asked that question in relation to vaccines and the part of the body that is the immune system? Instead, we have to rely on internet surveys for that kind of information. Yeesh.